We combine two brief programs for this one presentation.

BEYOND THE ARCTIC CIRCLE

Audiences see the expedition through the eyes of a grandfather telling a story to his grandson about a journey in search of a mythical fox. 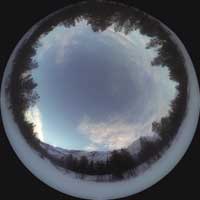 We take off on a husky sled and ride through the snowy forests of Lapland. Along the way, we learn about the taiga biome and evergreen trees. As we go farther north the lush boreal forests give way to vast white plains where it's hard to imagine any life could exist. 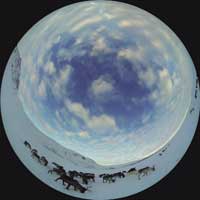 We arrive in the Arctic tundra — the home of the reindeer and twenty other animal species. How do they survive and what they eat? Don't they get cold out there?

With its permanently frozen soil and limited amount of sunlight, this barren-seeming place is home to about 1,700 varieties of plants able to exist in such extreme conditions. 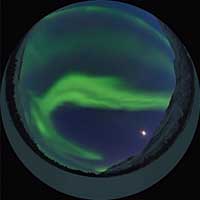 As the journey comes to an end and it gets dark, the special fox is still nowhere to be found.

Suddenly, in the middle of the night, the skies light up as the mythical creature of ancient Sami legend runs across the Arctic fells and lights up the sky with sparks flying from its tail, exciting the glorious aurora borealis — the Northern Lights.

Beyond the Arctic Circle is the first live-action film from the series "Natural Wonders of the World", which takes viewers to the most exhilarating locations on our planet to experience and learn about the amazing diversity of life.

An 11-minute full dome show about the science and mythology of the Aurora Borealis.

How does it form?

Why does it exhibit different colors?

Experience a full dome program that immerses its audiences in the spectacle of the aurora borealis.